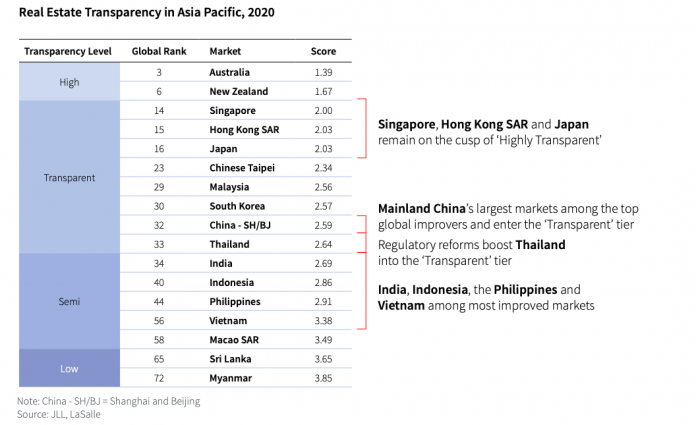 Several countries in Southeast Asia made notable improvements when it came to real estate transparency, according to a recent JLL report. The Global Real Estate Transparency Index 2020, a biannual research project from the consultancy, found that many countries in the region made significant progress over the past two years.

Thailand, Vietnam, the Philippines and Indonesia were among the top ten improved countries in regard to real estate transparency. Singapore was the region’s best performing country when it came to transparency and finished 15thglobally. Malaysia was the only other Southeast Asian country to make the Global Real Estate Transparency Index 2020’s top 30.

A total of 99 countries and territories around the world are ranked in the report. The final real estate transparency score is based on six factors: investment performance; market fundamentals; listed vehicles; regulatory and legal indices; transaction processes; and sustainability. This was the 11th edition of the report.

Thailand made further progress and was placed in the “Transparent’ tier by JLL for the first time. According to the Global Real Estate Transparency Index 2020, greater regulatory enforcement of lending standards and requirements for more frequent property valuations in the Kingdom along with improved accounting standards were catalysts for the improvement.

“Moderate gains in Thailand have in part been driven by changes on the regulatory front, and this has led to it advancing into the lower reaches of the ‘Transparent’ tier alongside Mainland China’s leading cities. The national accounting body has adopted new measures to move Thailand’s GAAP more in line with international standards, while regulators have tightened up on some lending standards including requiring greater frequency of appraisals. In Bangkok, a new land-use plan is scheduled to be launched in 2020 after significant public consultation, and this has helped to improve the predictability of the changes to come,” the report explained.

The country is now ranked as the world’s 33rd most transparent real estate market and recorded the fifth highest improvement during the past two years.

The Global Real Estate Transparency Index 2020 highlighted Indonesia as another country that made solid strides over the past two years. Meanwhile, Myanmar was the lowest ranked country in the region and 72nd globally.

Japan and Hong Kong scored highly once again and both countries are firmly entrenched in the “transparent” tier. The report added, “the improvements have been small, with the biggest advances recorded on the sustainability front as governments and industry players have placed a greater emphasis on health and well-being.”

This article appeared in thailand-property.com