The Pearl of the Andaman, as Thailand’s Phuket is sometimes called, is the quintessential tropical isle, where coral reefs grow beneath crystalline waters, and platinum sands give way to dramatic karst topography and verdant green vegetation.

Until the 1960s, Thailand’s largest island was shaped by its tin mining industry, but with the opening of the Sarasin Bridge in 1967, which adjoins Phuket to the mainland, everything changed. By the late 1980s, the luxury segment had replaced the backpackers as the island’s primary tourist market, bringing overseas investors in search of their own piece of paradise.

Phuket has weathered the storms of the 1997 Asian financial crisis and the devastating tsunami of 2004, and has emerged stronger, safer and more stylish than ever before, making it one of Southeast Asia’s most popular locations for a second home. Nowhere is this more evident than the island’s Millionaire’s Mile, an exclusive enclave on the west coast of the island, where some of the country’s most sought-after real estate is situated.

Thirty miles long and 13 miles wide, 70% of Phuket is covered by mountains that bisect the island from north to south. The most exclusive areas are located on the west coast, on Nai Thon Beach, Layan Beach, Bang Tao Beach and Kamala Beach, otherwise known as Millionaire’s Mile, where Phuket’s most expensive properties are located.

According to Jeab Jantana Ruayrinsaowarot, marketing supervisor at List Sotheby’s International Realty in Thailand, the average price per square meter on Phuket Island is around US$2,800 to US$3,500. However, at the luxury level, that increases significantly, said Bill Barnett, founder and managing director of hospitality and real estate consultancy firm C9 Hotelworks. He notes that the average price per square meter for high-end offerings is closer to US$5,000 to US$6,000. (Prices on the island are often listed in U.S., dollars, rather than Thai baht, because of the global appeal of these properties and the international market they attract.) 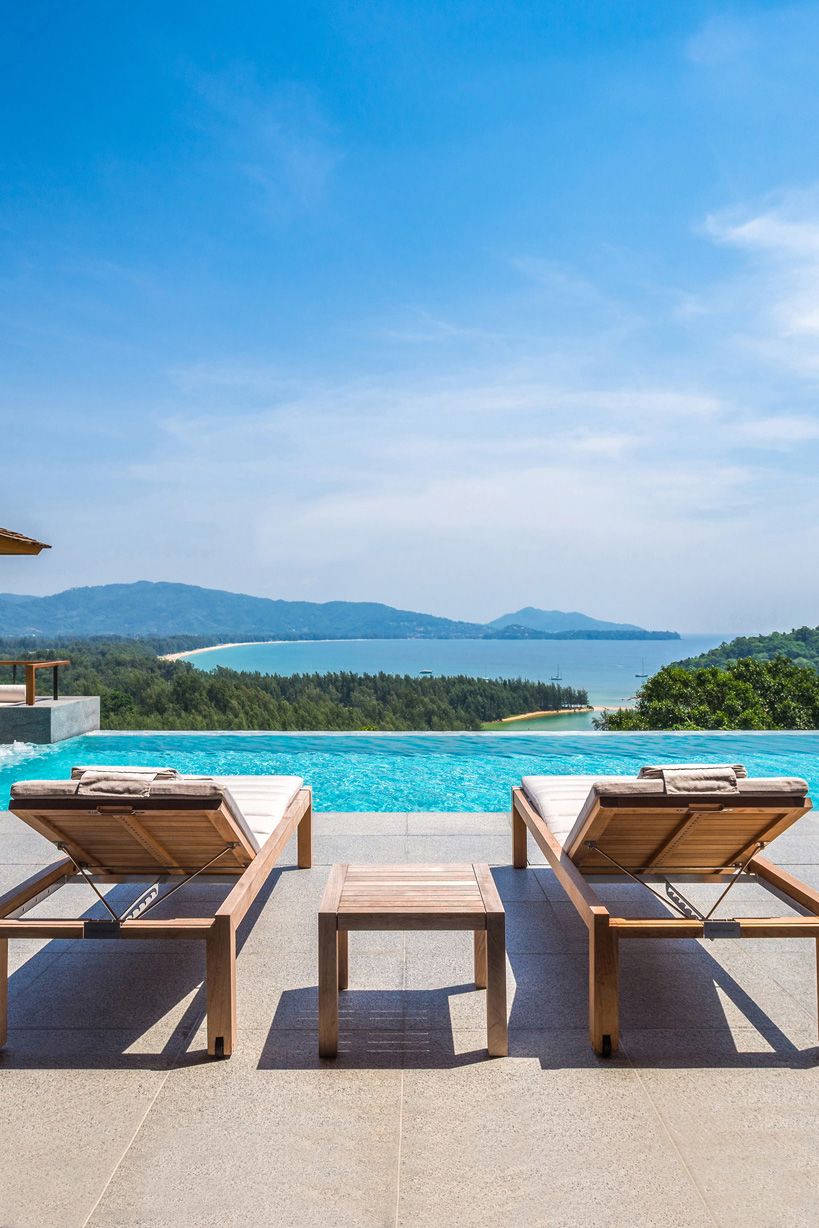 View of pool and the Andaman Sea from an Avadina Hills home. Photo: Courtesy of Anantara

Ms. Ruayrinsaowarot points to Avadina Hills by Anantara, a 16-villa development on Layan Beach currently in List Sotheby’s International Realty’s portfolio. Ranging from 2,785 to 3,715 square meters and four to six bedrooms, each unit offers indoor-outdoor living and a private pool and terrace, as well as access to five-star facilities at the neighboring Anantara Layan Phuket Resort, and is priced from US$8 million.

“Phuket offers a wide range of property, from super-luxury beachfront villas for the ultra-rich, to smaller investment properties, where you can buy a branded unit under hotel management with a guaranteed yield starting at a mere US$130,000, to premium condominiums ideal for whole families to enjoy,” Ms. Ruayrinsaowarot said. 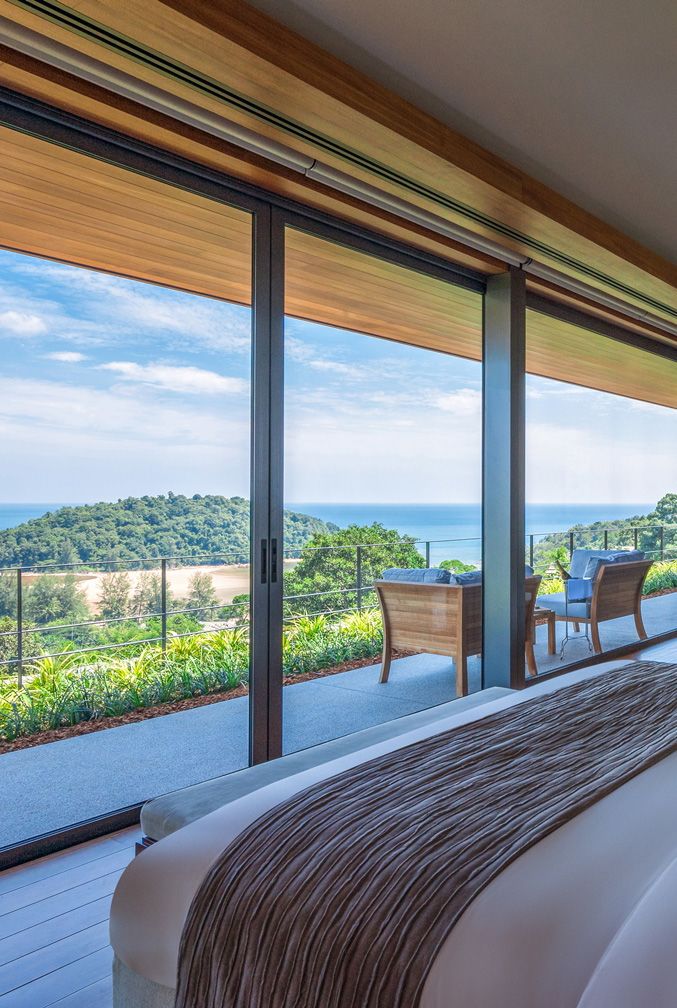 View of the terrace and the Andaman Sea from the bedroom of an Avadina Hills home. Photo: Courtesy of Anantara

An ultra high-end 10-bedroom private beachfront villa with a 40-meter infinity pool, cinema, generous staff quarters and two fitness centers can be priced at more than US$30 million.

Preferences in the luxury sector in recent years have shifted toward branded villas managed by hotel groups, such as Banyan Tree, Sheraton or the aforementioned Anantara, which offer reliable and quality management, access to world-class amenities, and the ability to generate income. Properties like these are still in the minority, however, with many still in the development and construction stages.

Mr. Barnett adds that luxury buyers are also looking at upscale condominiums, like the TwinPalms Residences MontAzure on Kamala Beach, favorable because they require less maintenance than standalone villas. The asking price for an 800-square-meter four-bedroom, five-bathroom unit here is around US$6 million.

It is worth noting that foreign buyers wishing to own property in Thailand are subject to certain regulations banning them from owning land. However, foreign nationals can purchase up to 49% of the units in any freehold condominium. Buyers from overseas can own a registered leasehold title of up to 30 years. It is essential to engage a good lawyer to buy property, experts say.

What Makes it Unique

Phuket’s outstanding natural beauty is the island’s premier attraction, enchanting everyone from adventurous types who want to explore the riches of the Andaman Sea to those who would prefer to take it all in from the comfort of a sun lounger. But beyond the great outdoors, Phuket also boasts a rich historical heritage that incorporates the local Baba culture with 16th-century Eurpean travelers and Chinese influences from the 1800s. Phuket Town is awash with color and Sino-Portuguese architectural marvels, while Buddhist temples dot the island.

And then there is the food. Southern Thai cuisine is distinctive for its abundance of herbs, coconut cream and rich, fiery spice mixes, while Phuket’s signature dishes add Chinese and Malay flavors into the mix. The island’s standing as an international destination also serves foodies well. The Michelin guide recently extended its scope to Phuket, bestowing a star on Pru, which specializes in refined farm-to-table cuisine prepared with ingredients grown at the restaurant’s farm or sourced locally, at Trisara Resort, in Layan Beach.

Phuket Island offers all of the contemporary conveniences associated with modern life. Central Festival Phuket is one of the province’s major shopping malls, a 25- to 35-minute drive from the west coast’s most desirable addresses, and home to high street fashion stores, like Levi’s and Zara. Turtle Village, which is between 25 and 45 minutes by car from Nai Thon Beach, Layan Beach, Bang Tao Beach and Kamala Beach, presents higher-end boutiques, including Thai silk purveyor Jim Thompson, plus a well-stocked supermarket. For international groceries, Villa Market in Chalong, is no more than 20 minutes by car.

Michelin-approved cuisine is far from the island’s only epicurean offering. In Phuket Town, Raya Restaurant serves local delicacies within a beautifully preserved 130-year-old Sino-Thai mansion. For a taste of imperial Thai food while the waves lap against the sand, at Old Siam, at Thavorn Beach Village Resort & Spa in Kamala, diners enjoy traditional cuisine first championed by the nation’s kings from the sanctuary of a private beach. Upscale international fare is also available. Italian fine-dining finds a home at Diavola restaurant, at Paresa Resort Phuket, while the Hyatt Regency Phuket Resort’s Sunset Grill is highly regarded and has a good selection of fresh seafood.

Thailand is one of the region’s leaders in medical tourism, and Phuket is no different. In addition to a number of smaller specialist clinics, the island is home to two respected hospitals, Bangkok Hospital Phuket and Siriroj International Hospital, where staff speak myriad languages to reflect the establishments’ international intake, including English, French, Russian, Chinese, Korean, Arabic, German and Japanese.

Phuket is home to a number of golf courses, of which Blue Canyon Country Club’s Canyon course, 45 minutes by car from Kamala Beach in the north of the island, is held in the highest esteem, counting among the country’s best 36-hole courses and recognized as the most exclusive establishment in southern Thailand. Royal Phuket Marina, 40 minutes by car from Kamala Beach on Phuket’s east coast, has an exclusive health club and high-end bars-restaurant, the prohibition-era themed The Speakeasy Yacht Club.

There are several international schools, many of which are accessible to those situated on Phuket’s west coast. Among them, the British International School Phuket is considered one of the best. Just a 30-minute drive from Millionaire’s Mile, its campus is spectacular with world-class facilities. Students ages 2 to 18 are taught according to the British curriculum, although the International Baccalaureate Diploma Programme is also available.

“Europeans used to be the biggest investors in Phuket; British, French, and investors and buyers from Scandinavia,” Ms. Ruayrinsaowarot said. “Now, the market has shifted to receive more Chinese-speaking buyers, since Phuket is only a couple of hours’ plane ride away from China, Hong Kong, Macau and Singapore.” Mr. Barnett echoed this, adding that Phuket is also seeing a growing number of Thai purchasers.

British artist Damien Hirst owns a six-bedroom villa, complete with a 22-meter pool, near Surin Beach, on the west coast, according to published reports. Mr. Hirst counts British DJ and music producer Clifford Price, a.k.a. Goldie, who lives near Kamala Beach, as a neighbor. Meanwhile, former Formula One world champion Kimi Raikkonen owns a luxury villa in Rawai, on the south of the island.

According to CBRE’s Thailand Market Outlook 2019 report, new mortgage regulations, a scarcity of freehold land in prime locations and a general increase in land price is expected to slow market growth this year throughout Thailand. However, the real estate services and investment firm is bullish, predicting that 2019 “will be a buyer’s market, an opportunity for end-users and long-term investors.”

Thailand’s Agency for Real Estate Affairs has been recording property prices at Patong Beach on Phuket Island since 2004, and it found that, by mid-2018, the land value there had increased at a compound interest rate of 14% per year, according to Ms. Ruayrinsaowarot.

“As one of the world’s most famous travel destinations, Phuket is very promising to investors both in terms of rental yield and capital gain,” Ms. Ruayrinsaowarot said. “Many projects promise guaranteed yield, and since beachfront locations are increasingly limited, prices will continue to rise as land becomes even harder to acquire.

The Thai government is investing in a number of infrastructure projects, including a second airport and a light rail, to improve transport links and promote local growth.

“With easy access to local rental management services, investors can choose to rent out their property for the yield of around 5% to 7% and rest assured that the price will keep climbing as the beach front land runs low,” Ms. Ruayrinsaowarot added.

However, Mr. Barnett is not quite so bullish. “With the influx of smaller-investment, hotel-managed residences, appreciation has softened and buyers are focused mainly on recurring rentals,” he said. “According to C9 Hotelworks’ research, pricing for high-end, resort-grade properties remains flat, given a huge influx of over 8,000 hotel-managed residences currently for sale in the market. These are seeing an uplift in pricing on new, off-plan sales.”

This article featured in Mansion Global.